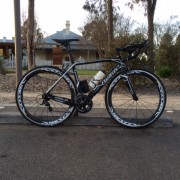 As you know I got a new bike so I though I’d do a little review.
Given the rain on Sunday morning & no ride, I was keen to get out even for a little ride to test the new Wilier Cento (chento) Uno SR. So a Ponds loop before the rain yesterday arvo was the go.
WOW!

It is an interesting bike in that it is super comfy, you get good feedback from the road but nothing harsh. Comes up to speed nicely under normal acceleration which is very linear. So for the first couple of hundred meters (uphill) I was thinking this is really nice but nothing super amazing. So I got to the top of the hill and was thinking, yep not bad (little did I know that I had just done my second best time up it! Not bad given a little over 2 weeks off the bike with a bad cold that is still lingering).

Next came the opportunity to test the wheels (Mavic Cosmic SLS) out along ridgeline and Stanhope parkway…… WOW!!! They spun up quickly and held me at 35Kms with a lot less effort than I’d expected, ended up with 2 PR’s. They are a bit on the noisy side, but I can deal with that, plus it sounds pro. The whole Aero verses weight still rages in my head though, but given the bike weighs fully dressed with pedals and cages in at 7.3kgs (crudely weighed with my bathroom scales), the aero seems to get the bike through the air better, just got to get myself more aero! Would be interesting to try some light wheels to compare…..

In the drops the 3T egonovas (44cm) are simply perfect for me. The transition from hoods to drops is so stable and natural. It is interesting feeling the flex of the carbon under power, its minimal but it is still there.

SO here is where it really is a SENSATIONAL bike.
The millisecond that you get the power on in a significant way this bike comes alive. Out of the saddle or in, it’s POWER! It feels like nothing is being wasted and every watt is hitting the road. It’s acceleration is awesome (although the Mavics where chattering away they felt nice and stiff). Coming into the corners is unreal, it really handles superbly. The Mavic tires that came with the rims are super sticky but I can’t wait to stick some Schwalbe one’s on it. At speed it is really a lot of fun in straight or twisty stuff….watch out Gorricks lane!

We went a small (50) frame after a lot of measuring and trialing with Fabian at The Odd Spoke. Previous I was on a SM (52).The fit is great, just a couple of minor tweaks and I recon I’m there.

All in all it ride great! Looks good too boot!